Many of my family members were staunch Taoists, including myself, except my elder brother who was converted to Catholicism.  Being the youngest in the family, I would follow my mother to temples for worship.

When I was in Primary One, I was drawn to a poster with the prayer of St. Francis, "Lord make me an instrument of your Peace...." it was hanging in our sitting room.  Somehow I was attracted to it and would stop to read it silently in my heart.

One day when I was about eight years old, I was in the market with my mother, she was at the fish stall buying some fish.  Suddenly two ladies with long black gowns, carrying pails stopped at the stall begging for food.  I was so fascinated with them and turned to my mother, told her that I want to be one of them.  My mother immediately pulled me away to another place.  Since then I have forgotten everything.

My friends invited me to the Novena Church, they went there to seek the help of the Mother of Perpetual Succour.  Since then, I have been attending the service every Saturday without failed.  I felt the peace and looked forward to it.  It was the Mother of God who introduced me to her son, Jesus Christ.  Many people tried to convert me but it did not work.  I was not interested because the attitudes of many Catholics put me off.  They changed their religion so easily.  I told myself that I would not be one until I find the true God and would be faithful to Him till I die.

Finally after many years of searching for the true faith I was baptized by a Redemptorist Father.

The first year of my Conversion I was not that closed to God.  During the second year I was attending daily Mass and Sunday Mass without failed.  One day I was struck by the phrase "follow Him" I told myself I am crazy.  I pushed it away from my mind.  It kept coming back.  I ignored it and told God, "why me, there are so many good people better then me, please go and look for them?"  I refused to heed the call and keep on pushing Him away.  I told Him I can serve Him with the people I worked with in my office and at home instead of becoming a Religious.

There were many obstacles leading to my vocation.  When I told my mother about my intention of joining the convent, she was very angry and told me not to mention it again or else she would commit suicide.  Our nanny and her friends begged me not to leave home.  How could I be so heartless to do so, they would have no one to listen to their pains and woes.  My sisters scolded me that I am so ungrateful to everyone if I am to do so.  My sister-in-law laughed and said that within three days I would leave the convent since I am so spoilt and choosy about food.  I would be a prisoner in the convent because there is no freedom of being your true self.  After struggling with all these thoughts in my mind, I was confused.

One day while I was attending Sunday Mass, while the Priest was reading the Gospel of the "Blind Man", God spoke to me and said, "Do you believe that I can help you to become a nun,"  I responded, "Yes, Lord I believed."

Few months lalter, during the Sunday Sermon, Father was telling the story of a skier who was caught in a storm.  It was getting dark and he had to look for shelter.  He saw there was a house, in order to get there he had to jump over a big crater.  Jesus told me "Jump Veron, trust me and I would hold you with my hands."

A vocation is a call God gives to persons whom He chooses.  Those who are called individually respond or fail to respond.  Vocation is God's gift, no one can acquire it if it is not given to him or her.  One can only receive and respond to it, but cannot claim it.  The one who is called recognizes his or her unworthiness and inability to fulfill the mission entrusted and therefore draws light and strength from God through prayer and intimacy with God.  Communion with God becomes the soul of the apostolate. 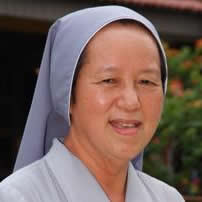