God’s gift of faith and His Call

Educated in St. Anthony’s Convent, Mother Natalia taught me Catechism in my secondary school days, but because of parental objection I was not baptized. However, God would not deny me the gift of faith.

Mother Natalia’s bubbly and joyful spirituality left a deep impression on me. And the impression was to bear fruit one a few years later. It had also planted in me the seed of a religious vocation.

After my secondary school education, family commitments made me choose nursing as a career. As a trained nurse, I worked in the Government hospital for a few years and then in a private surgeon’s clinic many years. I had a difficult employer. There was not much satisfaction in my job. There was an aching emptiness—I wanted something spiritual and more fulfilling and I cannot find it in my work.

A Catholic friend invited me to pray to Our Lady at Novena. Six years into the Novena devotion, I plucked the courage to get baptized. This time, there was no strong objection. I was baptized by

But then my call to the religious life refused to go away. I brushed it off thinking that it was a cowardly way of escaping my problems at work; I made a grave mistake at work and was extremely depressed. I could not shake off the nagging call and started going to Mass every Friday for discernment.

Finally after two months’ reflection, I was “forced”  to consider religious life seriously. God chose an unusual messenger, my second sister Jenny, a staunch Buddhist, to confirm the calling. Jenny dreamt that I told her I wanted to become a nun. That gave me a shock because I hadn’t told anybody of my desire nor my inner struggle. That’s when I knew that it was not my imagination but really God calling me.

At a priest’s ordination, his prostration at the altar for his final commitment shook me to the core. In this act of total abandonment, it was the Lord telling me to surrender myself unreservedly to him. I was ready to say “Yes” to the Lord. And the final prompting came to my niece who said, “Opportunity knocks once but not twice.” At this I decided to hand in my resignation after Christmas on 28 Dec. 1985 after working for 20 years

On the day I left home I remembered how my mum and my nephew cried. It was a painful and sorrowful moment for me too but I had already decided to follow my Lord and after making the decision nothing could make change my mind. I joined the Canossians on 2nd Feb.1986.

Six months later, I entered the novitiate to start a two-year training. In my second year at the novitiate, my youngest brother decided to become a Buddhist monk. After three months’ of training in a Singapore temple where he shaved his head, he joined the monks in Thailand. My poor mother couldn’t understand why her two children wanted to go away. But a friend, who used to be a washerwoman at St. Anthony’s Convent told her it was a blessing. My mother’s attitude changed and she had been supportive ever since.  In fact on my perpetual profession on Jan.1 - Mary’s feast of the Divine Motherhood, my mother was the most excited person around. She invited all her relatives to the occasion.

My training as a nurse enabled me to serve Him as a Canossian Sister in St. Joseph’s Home for the Aged. The Home has included a hospice and I could see how the Lord had been thinking of me even before I thought of Him   He knew my training as a nurse would come in handy to ease the pain of the elderly and the terminally ill  and how my faith and mission as a Canossian will help to comfort them spiritually, bringing the Love of Christ to them.

The final proof of His Divine plan for me happened in April 1996 when I had to nurse my own father at the Home for terminal cancer. With God’s blessing and grace my father endured the last few months with very little discomfort. But what was most beautiful and miraculous was his reconciliation with himself and his loved ones and his final conversion to the Catholic faith. His miraculous conversion and peaceful death was the strongest testimony I can give to my family members of Christ’s for us.

From 1988 to 2003 I had been at St Joseph’s Home caring for the elderly aged sick and terminally ill patients. During that period, I had experienced

1.God’s loving hand upon my family

2.A sense of fulfillment

3.Immense joy in serving the sick and the suffering

4.A deep sense of belonging to the Canossian daughters of Charity

Although I had the experience of nursing the aged sick, I found myself lacking in knowledge and felt the call to do a course in gerontological nursing. After much consultation, discussion and discernment, I decided to take the challenge of updating the nursing knowledge in caring for the elderly. I went for advanced diploma in nursing—gerontology at Nanyang Polytechnic in 2004.  During that year I had the time for prayer and for deepening the relationship with Jesus Crucified whom I see Him in the sick, suffering and the elderly.

The heart of the matter is the ‘listening” to the call of the God – to be transformed in the image and likeness of Christ – to become the presence of Christ in the world.

As a Canossian I am committed to share life with my sisters and together live the deep yearning of St. Magdalene “ABOVE ALL TO MAKE  JESUS KNOWN and LOVE IN THE VARIOUS MINISTRIES.

This poem by Sr. Marcella Holloway CSF, struck me very much before I joined Religious Life:

His voice may be, in the wind

On printed page in open book

Or the intonations of a friend

And if you hear him speak

Be generous in your reply

Not ever questioning, “Why”?

And He needs religious women

To witness the New Jerusalem. 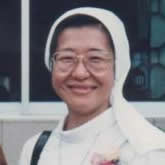