She was 17 when she first met an old Canossian Sister at the door at Vimercate. She was struck by the Sister’s gentleness. She was invited to visit them. Before that she knew another congregation in Milan. She was introduced to the Canossians by a friend who was surprised that she did not know them.

She still remembers vividly that she was very attracted to Jesus in that chapel. He seemed to be calling her and when he calls you cannot say ‘No’. She felt grateful to her family who encouraged her with the words, ‘You belong to God’.

At 19 she entered and knew that she wanted to be a missionary.

Her First Profession was made on 16 June 1939 at Kowloon,Hong Kong.

Sr Virginia was also teaching in our Convent at Segamat for some time, but most of her years was spent as a teacher at St Anthony’s Convent, Singapore. he taught Catechism to Primary school children, even to the boys at St Anthony’s Boys’ School .  When St Anthony’s Convent was at Middle Rd, Sr Virginia was in charge of the Sacristy of St Joseph’s Church, which is in the same compound as the Convent. She was also in charge of distribution of rations to the poor. She is now 94 years old and is a praying presence at St Joseph’s Canossian Convent. 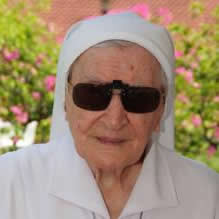