I came from a family of 3 girls and 2 boys. I had an elder sister who had died of fits when she was only 2 months old. Hence, I become the eldest among my other siblings.  My family practiced Taoism in my growing up years.

Today, except for  one of my brothers, my family have embraced the Catholic faith.

When I was born, I was very sickly.  Even as a young child, I was constantly down with life-threatening infection.  One occasion, I developed a very bad infection.  Fearful of losing me, I was kept in a dark room with my mother carrying me most of the time.  My life then was hanging on to a thin rope between life and death.  However, God in His plan had preserved my life then.  I recovered.

Growing up in World War II era, it was rare for parents to send their children to school.  Some fortunate ones were lucky to have started school.   Unfortunately their education was either disrupted abruptly or terminated permanently.

My father was a far-sighted man who believed strongly in the importance of education. Thus, I was very privileged to have completed my education, though not without major obstacles and upheavals in the process.

I commenced my education in a prestigious Chinese school then known as Nanyang Chinese High School in 1950. Back then, most, if not all, the Chinese schools were penetrated by the Communist. Their mission was to indoctrinate the young minds. Each morning, I  arrived in school with much anxiety and fear, knowing that I would be greeted with the phrase “Go back to China”  -   a Communist message that was left inside every desk everyday.

Many vulnerable students succumbed and left for China. There were others who loved their parents so very much and chose not to leave and hurt their parents.  They were constantly and daily pressurized to submit to the communist influence.  I was one of the latter group of students.

Unable to take the pressure, I confided in my father.  Upon hearing my fear, he acted immediately.  He took me out from the Chinese school and enrolled me, instead, in an English school,  away from the communist influence.

It was in this school, Balestier Road Girls’ School, that I had my first contact with the Catholic faith through a Canossian Sister, the late Sr. Margherita Lazzaroni who as then the principal of this government school.

(At that time, the government engaged the religious men and women to head the primary schools until the principals were trained for the government schools.)

The transfer from the Chinese stream to the English stream saw me joining the school at a lower level due to  my lack of English proficiency.  But after a while, I overcame this handicap and was able to understand and communicate in the English language. At that time, the highest level for the primary school in the government was Standard 4.  Providentially, Sr. Margherita was about to complete her terms at Balestier Road Girls’ School.   She offered me a place at St. Anthony’s Convent.

At St. Anthony’s Convent, I  enjoyed studying all the subjects taught except one: Bible Knowledge.  From a very young age, my concept on Christianity was very negative.  I was taught that Christianity was a foreign religion.  I reacted strongly against that faith formation in the school.

One Lent, Sr. Margherita had us watch the film on The Passion of Christ.  The scene on the scourging of Christ was so horrific that it caused a deep impact on me.  I felt a strange feeling within and I somewhat had an instant change of heart and perception on Catholicism.

Immediately, I ran to seek Sr.Margherita and asked if I could start my Catechism with her.  She willingly took me on.  Before my baptism, I told my father my desire to be a Catholic.  My father was an open-minded man.  He said “If you want to be a Catholic, then be a good Catholic.”  I had no problem from getting the approval of my mother as she was not a staunch Taoist.

As time passed, I was not satisfied with just baptism.  I was feeling something was missing…I was hungry spiritually.  This hunger went on until I had completed my Standard 9 education (the highest education level at that time which is equivalent to G C E ‘O’ Level today) in the year 1957.   I did not do anything about it and went on to sign up for a nursing career.

On one occasion, while reading a particular spiritual book, I was struck by a phrase, “You must love God with your whole heart…”  I doubted and questioned myself,  “Do I really love God?”  I realized that I love my parents more than God then.  But deep within I was feeling very empty and kept questioning “Is He calling me?”  My intuition said, “Yes, He is calling me.”

With that awareness of his calling, came the turbulence and emotional turmoil within and with my parents and family members.   But the calling was too strong to be ignored.

The phrase “You must love God with your whole heart..” paid a friendly visit to Fr. Texeira, the parish priest of St. Joseph’s Church, Victoria Street.

Fr. Texeira raised his first question to me “How have you been?”  That moment, I could not control my tears.  I was feeling disturbed and shared with him what I was experiencing within.  Upon hearing me, he immediately picked up the telephone, made a call to St. Anthony’s Convent and spoke to the Sister in formation, Mother Ada Nardi.

After the call, Fr. Texeira suggested that I should meet her.  I went over to St. Anthony’s Convent but did not meet Mother Ada.  I was wandering in the Convent quadrangle.  There I met Sr. Margherita and she brought me to meet a Sister.  We chatted a while before the Sister referred me to Mother Delegate, Sr. Maria Drago.  From her, I was again referred to Mother General, Sr. Antonetta Novello.  She asked “Are you ready to come with me at the end of January?” That meeting was at the start of January. They were having their General Canonical Visit then.

Without a second thought, I responded with great enthusiasm and spontaneously; “Yes.”  I went back to the hospital and tendered my resignation  the same day.

I was a member of a group known as The Children of Mary.  I was at the meeting with the group together with two of my cousins one day when Sr. Margherita  walked into the room and announced, “Mary is going to be a nun."

My two cousins went home to bring the news to my sister, Angeline.  My sister informed my mother who was sewing then.  She was shocked and sobbed uncontrollably.  Quickly, she dragged Angeline with her to the Nurses’ Hostel where I stayed.  There she cried and cried, calling out for me.  Feeling embarrassed with the commotion, I tried to pacify her and said, “I will go home after my duty tonight.”  I then shooed her home with Angeline.

That night after my duty at about 9.30pm, I found my father waiting for me at the hostel carpark.  He drove me to the Explanade.  I was very close to my father and would usually share with him anything under the sky.

I was rather quiet that night.  My father started the conversation.

Father :
“Why didn’t you tell me when it is such an important matter?”

Him     :
“Chinese New Year is round the corner.  Can you delay your departure?"

My father then suggested that we go to see Fr. Myers, a Redemptorist.  I was not keen as I was very aware that  girls who were nurses and wanted to be a nun would be referred to the FMDM, the Mt. Alvernia Sister by the Redemptorist.  I was more interested to join the Canossian Order.

My mother then went to see a medium.  The medium told her that I would not leave the family to be a nun.  She went to see the medium three times just to make sure.  On her last visit to the medium, he said to her “Let your daughter go, she will not succeed.”  Only then, did she allow me to leave for the novitiate in Hong Kong.

Finally, I got their permission and left for Hong Kong on 16 March 1959 after the Chinese New Year celebrations.  My parents were very heartbroken with my decision and upset with the Catholic religion.  They blamed the religion for causing them to “lose” their eldest daughter.

I made my first profession on 13 May 1962.  About one month later, my father wrote a ‘thank you letter’ addressed to my Formatress for accepting me into the Canossian Family.  (A photostated copy of the letter is now with me.)

It was indeed through God’s grace that my parents were reconciled with my life option.  Some years after I became a Religious Sister, my parents and most of my siblings had also embraced the Catholic faith.

Today, as I reflected on the last fifty years or so, I asked myself if I were to relive my life  again, would I still opt for Religious life; the answer is YES, I will.

I feel very blessed to be called, chosen and equipped by God.  I am very happy with my community and ministry.  I am grateful to God for my biological family as well as my religious family, the Canossians. 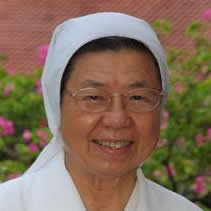