My life as a religious began on 20 January 1990 with the Canossian Sisters.  My decision to become a religious sister was not without its share of prolonged discernment, resistance to the call and resistance from my parents.  Here is my vocation story.

I was born into a Taoist family with 5 boys and 1 girl, excluding 3 other male siblings who had died when they were babies.   I received my education at St. Anthony’s Canossian Convent up to Secondary 4.

Like all young children, my mind was constantly filled with questions, including questions like “Who am I? “Why was I born?”, Why do I exist?” and so on.  When I reached the age of 14, deeper questions had surfaced, such as “What is the meaning of life?”, “Where am I heading in life?”, and “How can I live a more meaningful life?”

As the years went by, I slowly realized that God was providing the answers to my questions, bit by bit.  The first indication came when I was 16.  One day, I was taking refuge in the Church of St. Joseph’s at Victoria Street at 5.30am.  I was staring blankly at the crucifix in the Church, when I heard myself saying aloud, “I want to be a nun”.  However, it did not leave a deep impact on me and I forgot about this incident.

I began working at the age of 17 and would do so for the next 13 years.  My days were constantly filled with activity; after work, I would go out at night with my friends and have a great time with them until the wee hours of the morning.  However, one day after my all-night outing, I felt tremendously empty within while on my way home alone in the bus.  As the bus passed by the Church of the Risen Christ, the church bell began to ring to signal the start of Mass.  That very moment, I felt a great peace coming upon me, and a sense of deep belonging --  to whom, I did not know.  Since then, I would hear a soft whisper whenever I was alone, saying, “Somewhere out where needs your hand.  Would you stretch out yours?”

This went on for about 11 years, until I finally made the decision to embrace the Catholic faith.  As I feared offending the Taoist God, I went to the Goddess of Mercy temple one morning with the intention to ask if I could be baptized as a Catholic.  To my surprise, I began to pray the Lord’s Prayer aloud with both eyes opened and only realized what I had done after I had closed the prayer with “Amen”.  I took this to mean that I had been granted permission.

There was a vocation week shortly after my baptism, so I bought a copy of the Catholic News home.  As I read the articles containing vocation stories of several priests and religious people, there was a stirring within me and I heard the same whisper calling out to me again, “Somewhere out there needs your hand.  Would you stretch out yours?”  I did not respond to the call.

I enjoyed attending wedding Masses, even when I did not know the bride or groom personally.  I especially enjoyed watching the bride walk up the aisle and imagining myself doing the same one day.  During these times, I would hear a gentle voice saying, “This is not for you, Joanna.  I have something better for you in-store”.  This happened at three different masses.  I could not believe my ears.

The fact that I was baptized had not convinced me to change my lifestyle, as I was still having a lot of fun.  However, each time I was alone, I heard the soft whisper.  By this time, I was already working in a good firm, drawing a good salary and receiving pay incentives.  I was surrounded by supportive colleagues and had a very understanding boss.  My life was going too well for me to contemplate leaving everything behind.

However, the soft whisper became more insistent and frequent.  In a bid to ignore this call, I packed my days, hoping that I could tune it out by remaining busy.  It was also during this time that I developed a liking to the sound of sea waves.  I would sit on the beach and listen to the comforting sound of waves whenever I had the opportunity.  This allowed my heart and mind to seek refuge from the chaos of my life.  It was also in the midst of this stillness that I continued to hear the soft whisper and the invitation it represented.  This happened every time I am at the beach.

Though I remained unresponsive to the call as it was not strong enough to invoke a response from me, God did not give up.  I felt His call again through a series of conversations I had with a colleague.  Ten minutes before dismissal at work on a Friday evening before Vocation Sunday, I was packing up to go home when my colleague spoke to me.

“Your question is so funny.”

“What are you going to do about it?”

“Don’t tell me you did not know that his weekend is Vocation Sunday!”

“So, what are you waiting for?  Have you ever thought of becoming a Religious?”

“Have you ever tried?”

I was taken aback by his questions, as I had not disclosed the callings I have been receiving all these years to any person.  This conversation compelled me to reflect and question my purpose in life, just as I did at the age of 14.

Seeking the answers to the questions I had from my youth had now become a goal.  I could not concentrate on my work as I was constantly distracted by the soft whisper, which was lingering in my mind for much longer than it did in the past.  Being the sole breadwinner of the family, I was disturbed.  Doubts filled my mind.  I worried and questioned the impact that a decision to embrace a calling to religious life would have on my family, since we did not have an alternative source of income to provide financial support and pay the bills.

I jotted down the pros and cons of the three life options that were in front of my eyes --  singlehood, marriage and religious life.  As I reflected upon the options, memories of earlier years appeared in my mind.  I remembered how uplifted I felt when I experience the love of my uncles and aunts as they fed, sheltered and educated me and my siblings when we were young…the hope and security that I felt upon getting a good meal and comfortable bed to rest my head on my first day as a boarder at Canossa Convent…the joy of receiving pocket money from my form teacher, Sr. Janet Wang, at every recess time.  It dawned upon me that this soft, persistent whisper that has been ringing throughout my life --   “Somewhere out there needs your hand.  Would you stretch out yours?”  -- the questions I bore were linked.  However, yet again, I pushed aside and resisted the call.

One night, I was dancing with my friends in a disco when I was touched by the lyrics of a song that was playing “Are you going back to the one who loves you or are you going back to the one you love?”  A thought, as though in reply, hit me: “Who could give me that security except God Himself!”  This was such a powerful moment that it led me into action to make a choice -  a choice for religious life!  I felt a deep tranquility and serenity surrounding me the moment I said “Yes, Lord.”

Hence, I commenced “shopping” for an Order that would accept me.  As my knowledge of religious life and religious orders were limited, I could only think of a few Orders --  Little Sisters of the Poor, The Good Shepherd Sisters, The Franciscan Missionary of Divine Motherhood (FMDM), The Infant Jesus (IJ) and Missionary of Charity Sisters (Blessed Mother Theresa’s Order).  However, I was not inclined to join those Orders and gave all sorts of excuses to refrain from joining them.

Just as I was about to give up, thinking perhaps I could have discerned wrongly, I recalled a musical I saw of St. Magdalene of Canossa which I watched back in 1974.  A soft inviting voice gently prompted me: “Joanna, you have forgotten your own school.  You had forgotten about the Canossian Sisters!”

I started my weekend “Come and See” with the Canossian Sisters.  Six months after living with them, I decided to join their Order.  I wrote a 3-page long letter to my parents expressing my desire to enter religious life.  However, I met with heavy resistance --  my mother did not want to talk about the matter and said “if you want me to die, you go”.  My father gave a very heavy sigh and said he did not understand me.

Upon my insistence, my mother commented that she had always known that this day would come since 10 years ago.  I did not dare ask her what she meant.  Eventually, I found out that my mother had consulted a fortune-teller, who had foretold my decision.

The day finally came when I was to leave my family, my doubts and the life that I had built over so many years, and enter a world that that had beckoned since I was 16.  I packed my bags and left home without bidding goodbye to my family.  It was 19 January 1990, 5.15am. 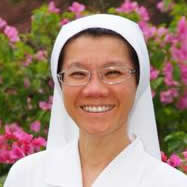