I wasn't born a Catholic. When my mum was sick we moved to Circuit Road, but within a few months mum died, just 5 days after my ninth birthday. She became a Christian at her deathbed, believing that she would see Jesus and meet dad and her loved ones again. While she was in hospital dad had bought me some story books, my favorite being a children's Bible. I read about Jesus who loves little children. I told myself that I would go and find Him when I grew up. My relatives had asked me to pray to him to heal my mum but I wondered whether He would hear my prayer as he did not know me. Surprisingly I knew he was more real than the Wizard of Oz.

Mum wanted me in a Catholic school so I was already in Katong Covent. She had even chosen a name for me from her favorite group whose lead singer, Dorothy, used to sing hymns on Mary. After her death, dad would bring my brothers and myself for service at the Presbyterian Church at Koon Seng Road. However I "knew" God was in the Catholic Church for I was attracted to his presence in the blessed sacrament at Holy Family when we had school masses. Mary was my friend. Also being in a Catholic school I saw the sisters. I thought that if I wanted to find God I must be like them for they came from where God came from! In this case Ireland! Then came Sr Jo, in her short skirt, riding on a bike and singing.  I remembered the song she sang about how God wanted to gather us to Him as a hen gathered her brood.  I wondered about my Catholic girls receiving communion and having special Catechism lessons. I was hungry for God.

When I was in secondary I doubt my teachers ever thought that I would become a nun! Though I was in the pure science class I look far from being goody science student. I was quite vain, the typical teenager. My secondary four teacher actually send my future godma and myself to attend a drugs talk! Yet despite my external short skirt and flowing long hair, deep inside I was hungry for God. I read the Bible, being attracted to St John's. My favourite verse was: "For God so loved the world that he sent His only Son".

So at sixteen, I told my grandma that I was going to be a nun. Are you crazy she screeched, saying that my dad had brought me up and since I had no mum I had to look after him and my siblings. Well since I couldn't be a   nun I told my dad that I wanted to be a nurse. What, you want to wash's people's backside….his exact words, crude as it may sound. Goodbye to these desires then.

After my school days I took up Catechism with a priest at Holy Family. I had also met a guy whom I liked and he was my first Catholic. I remembered asking God to send me a Catholic guy friend. I remembered being able to talk to God candidly too. One day on my way to Catechism lessons, I was hit by a van. For some months I stayed withy my gran for my right shoulder blade was fractured. I was happy to spend time with my younger sister too who had stayed on with my gran after mum died. During that time, I thought that I would take my Catechism lessons seriously. Thoughts of being a nun returned. That Christmas instead of going on  a date I decided to go for midnight Mass instead. Dad waited for me at the canal next to St Stephen's.  I was baptized at Easter at Holy Family, by a second priest who took over  my Catechism lessons. Whenever I went to mass at St Stephen's I would feel something stirring within me whenever I hear the words 'Come follow me'. Now I told the Lord that I had changed my mind about being a nun, I wanted to get married. However I remembered telling my Catholic friend that I was going to be a nun. He said that he was going to be a priest!

Immediately after Easter, dad was diagnosed with cancer. It was a very painful period. In December that year, dad passed away. One week before he died, gran shocked us all by dying peacefully in her sleep after taking some medication from the doctor. After grieving for some time I decided that I better start finding a job and look after my siblings. I saw my Catholic friend once or twice after that but I knew that he wasn't the one for me.

When I was working I would go for Sunday evening Mass. At times I didn't feel like going. So once the week after I didn't go I went for confession. Fr Joachim Teng told me to join the choir so that I would have more incentive to be present on Sundays. I decided to join the choir, telling God that I could not sing but that I would join the choir but not be a nun. Somehow I became involved not only in the choir but also in the youth group. Fr Nicholas Ho was a super active priest with the youth. He organized camps, went Chinese New Year visiting with us and even arranged for Christmas caroling. We even went for a recollection day at Chestnut Drive and I surprised myself by praying for vocations. Come follow me kept nudging within my heart but I pretended not to hear.

The turning pint came one day at prayer. It was as if Jesus Crucified was telling me that he loved me but I was ignoring Him. I remember asking him what He wanted from me. A few days later I was at St Joseph's [city]. It was the 13th of the month. 13th is always special to me, mum died on the 13th of May and gran, December. I asked the Lord what he wanted. I had the magazine, Rally in my hand and I looked at the cover. There was a picture of Jesus Crucified with the words: You call me Master but you do not ……You call me Lord but you do not…….. Yes Lord what do you want me to do that I am not doing? I turned the pages and saw a picture of three sisters taking their final vows. Is this what you want Lord?

A few days later, I plucked up courage to call the number shown. I was invited to visit the place at Highland Road. The first thing Sr Marilyn did when I visited them was to bring me to the prayer room. I had the funny feeling that I had come home. 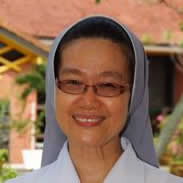