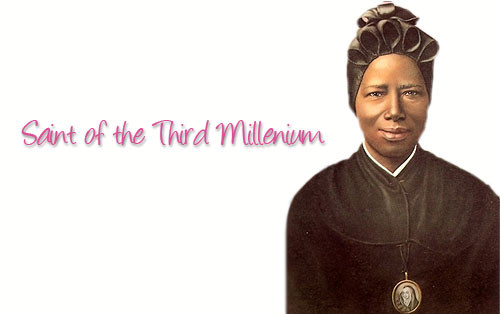 The Life of St Josephine Bakhita

Pope John Paul II brought the relics of Blessed Bakhita back to Sudan in a joyful celebration with a million Sudanese people.

Pope John Paul II proclaimed her a Saint for the Third Millennium.

I was born in 1869 in a village in Sudan, Africa. I came from a happy family with six children: three boys & three girls. I’ve forgotten a lot about my childhood but I remember just how much Daddy & Mummy loved us & how we cared for each other. While the adults were working in the fields, we children used to play games & have lots of fun.

A Slave Girl in Africa

When I was around seven years old, I went with a friend to pick flowers & herbs in the wood. Suddenly two strangers appeared. They caught hold of me, threatened to kill me & carried me off. I was locked up in a hut far away from home & then sold to some Arab traders.

I managed to escape with another little girl, running through the forest at night. We were terrified by wild animals but I saw a mysterious bright light & a shining figure & the wild animal ran off.

A man we met gave us food and shelter, but he cheated us & sold us to another merchant. After days of traveling with a slave caravan, we arrived at the slave market in the city of El Obeid where we were put on show like animals. I was sold to different masters & mistresses. Among these was a Turkish General whose wife & mother ill-treated their slaves.

One day they decided to tattoo us. I was given six cuts on my breast, sixty cuts on my stomach & forty-eight on my right arm. Then the woman spread salt on the wounds & rubbed it in. I lost so much blood & was in great pain. The agony lasted for days. The only reason I didn’t die was that the Lord had better things in store for me.

In 1883, war broke out & the General had to escape to Khartoum with his family & ten of us slaves. In that city I was sold to Mr. Calisto Legnani, the Italian Consul, who treated me well. Two years later, the rebel troops were approaching Khartoum & Mr. Legnani received orders to return to Italy. I begged him to bring me along and he agreed.

A Maid and Nanny in Italy

I was happy when the ship arrived at Genoa. I felt: “My new life is beginning!”.

Mr. Legnani’s friends, Mr. & Mrs. Michieli asked to keep me & brought me to their house in Zianigo near the city of Venice.

A year later, a beautiful baby girl Mimmina was born & I was asked to look after her. I loved Mimmina. When Mr. & Mrs. Michieli had to return to Africa for their hotel business, Mimmina & I were entrusted to the Canossian Sisters at their Catechumen’s Institute in Venice.

We were looked after by a kind Sr. Maria Fabretti who taught us how to read & write. There, I came to know about God. The following year, in 1889, Mrs. Michieli returned to bring Mimmina & I back to Africa. I decided to remain in Italy as I wanted to become a Catholic.

A Child of God

Finally I am a child of God, no more a slave!

I was happy to receive the Sacraments of Confirmation & the Holy Eucharist. I helped the Sisters for four years at the Catechumen’s Institute & realized that I had a great desire in my heart: to live for Jesus. Oh! If only I could fly home to tell my people about the love of God.

I wanted to follow my “Master,” I wanted to live for Him & realized that Jesus was calling me to be a Canossian Sister.

I entered the Novitiate when I was 24 years old on 7 December 1893. On 8 December 1896, I took my first Vows as a Canossian Sister in the mother House in Verona.

In 1902, I was transferred to the Canossian Convent in Schio & was happy to serve as cook, sacristan, nursing aide & door-keeper.

During World War I, our house became a military hospital & I helped to nurse and console the wounded soldiers.

I also loved the children who came to our school who used to call me “Mother Moretta”, the little ones would even want to lick my hand to see if it was covered with chocolate!

My health gradually became worse & after a fall I had to move around on a wheelchair. All I could do was to look at Jesus on the Cross & pray.