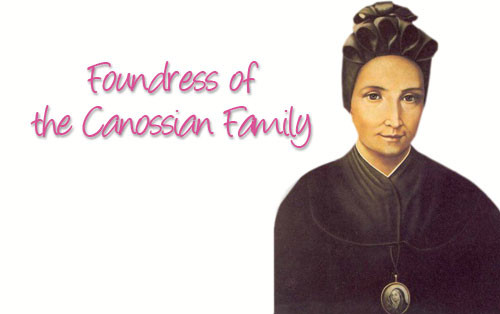 Her birthplace and childhood

The life of Magdalene of Canossa dates back to 1774 the year of her birth as the second child of a noble family from Verona, the Marquis Octavius Canossa and Countess Maria Terese Szluha. The name “Canossa” has been connected with the history of Italy since the 11th Century A.D.

When the famous Countess Matilda (1045-1115) exercised a strong political influence for nearly half a century. Even though the lineage is not clear, in the 17th century the Canossa’s of Verona held a prominent position in the city life.

During her early childhood Magdalen experienced deep suffering. At the age of five her father died in a geological expedition and her mother remarried and left the Canossa Palace and her children behind. When Magdalen was seven years of age. In the absence of parental affection Magdalen turned to Mary for consolation:

“I wept …before Mary, invoking her in tears

and calling her by the name of ‘mamma!’…

little by little I placed myself in the heart of Mary."

Magdalen was 15 years old when the French revolution broke out and shook the whole of Europe. In Verona the real consequences were felt about seven years later, when, on June 10, 1796, General Napoleon entered the city as a conqueror.

Her Search for Meaning

After the revolutionary upheaval, Magdalene of Canossa, among the most influential women of her time, was the protagonist of a spiritual rebirth. In addition to her involvement with a charitable organisation in favour of the wounded and the sick, Magdalen gave special attention to girls living in poverty and those who had been abandoned.

She concentrated her efforts and energy on building up an institution for them, receiving the first two at the “Canossa retreat” in 1801. In that same year Magdalen’s work earned Napoleon’s admiration for the “Charitable Establishment” erected in a suppressed Convent in a poor area.

Magdalene’s growing years were marked by suffering and trials. She lived in a society of contrasts between the very rich and those living extreme poverty. The society she grew up in was forgetful of God and dominated by arrogance and privileges.

It was in this environment that Magdalene discovered deep within herself the desire to share the life of Christ in the salvation of many who had been abandoned in their poverty, exploited by the egoism of the rich and oppressed by the evils of her day. Magdalene began to give of herself without reserve to children, youth and women who had to reckon with economic as well as moral, spiritual, intellectual and family poverty.

In 1808 Magdalen left the Canossa Palace indefinitely and with some companions, established herself in the poverty-stricken district of San Zeno where she was happy to give herself. This small group of women would become the contemplatives not of the cloister but on the street. Magdalen called her companions “Daughters of Charity” because their task was to reveal God’s love to humanity.

A Heart Open to the World

"The spirit of the Daugthers of Charity is

to be detached from everything and everybody,

to be available to serve the Lord in every country."

Magdalene’s vision implied a Missionary spirit often stating that she was prepared to go anywhere and do anything so that Jesus would be known and loved. But this particular dream was not to be realised in her lifetime. Today the Daughters of Charity living the spirit of Magdalene are present in 35 countries around the world and the “Canossian family” includes the Canossian Sons of Charity (priests/brothers), the Secular Missionaries of St. Magdalene and the Association of the Lay Canossians.

On October 2, 1988 Pope John Paul 11 proclaimed Magdalen “Saint”, a prophet of Charity. Magdalen, with her life, has written a significant page in the history of humanity, a page that speaks of her personal journey in the Spirit, and above all of the Greatest Love of Christ in a broken world.